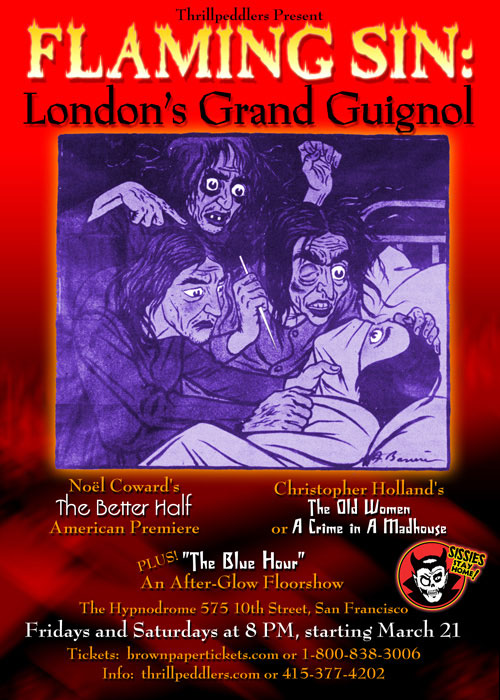 In an amazing coup for Bay Area theatre, a “lost” one-act play by the legendary Noel Coward will have its U.S. premiere in San Francisco. It will be presented on Friday and Saturday evenings at 8 p.m., March 21 through May 3, at Thrillpeddlers’ Hypnodrome, 575 10th Street, San Francisco.

The Better Half, scathingly funny and bitter, skewers the sexual mores of the British upper crust. The play was recently unearthed-after 85 years in limbo-by a pair of Welsh academics. Coward wrote it in 1921, at the age of 22, when he was still several years away from breaking through as the most popular playwright in the English language. “His caustic wit was already fully in evidence,” said University of Glamorgan professor Dr. Richard Hand, who discovered the original manuscript (with his colleague, Michael Wilson) deep in the files of the Lord Chamberlain at the British Library.

“Coward wrote it for London’s Grand Guignol Company,” Hand explained, “which was the British version of France’s notorious Théâtre du Grand Guignol, which specialized in scandalous comedies and terror plays. It was performed in May 1922, but never again. And it never has been published in any form.”

It is fitting that the American premiere of The Better Half is being staged by Thrillpeddlers, a San Francisco theatrical institution dedicated to reviving the traditions of Grand Guignol. (The troupe was last year’s “Readers’ Choice” for best local theater company in the SF Weekly’s Best of San Francisco balloting, and it figures prominently in the special features of the new Sweeney Todd DVD to be released on April 1, 2008.)

Dr. Hand will be in attendance at the March 21 show to discuss the discovery of the Coward play as well as his new book, London’s Grand Guignol and the Theatre of Horror.

Said Thrillpeddlers cofounder and artistic director Russell Blackwood: “It’s incredibly exciting, and due largely to our longstanding relationship with Richard Hand and Michael Wilson, that the Coward estate granted us the rights to stage the American premiere. And what’s even better is that the play is really good! According to Richard, the manuscript shows where the British censors struggled with cutting Coward’s more controversial innuendoes. But in the end it was so well written, and so funny, that they left it alone.”

The play is an unconventional comedy of manners depicting the sexual intrigues of an unhappily married couple, Alice and David, and the suggestion of David’s possible dalliance with Alice’s best friend, Marion. Alice Louise (Alice), Jonathan Ingbretson (David) and Alison Sacha Ross (Marion) portray the well-heeled but duplicitous troika.

“Given that it was written in 1921, it’s still remarkably relevant to a contemporary audience,” said San Francisco writer-director and “Czar of Noir” Eddie Muller, who is directing the production. “This isn’t something the young Noel Coward hid away in a drawer. It’s a wickedly structured and snarling piece of work. I’m really excited to be resurrecting it. It’s an honor, and the cast is absolutely stellar.”

The Thrillpeddlers are presenting the Coward play as part of “Flaming Sin: London’s Grand Guignol.” Also on the bill is The Old Women, or A Crime in a Madhouse, André de Lorde and Alfred Binet’s quintessential Grand Guignol shocker, which will comprise the “terror” portion of the evening. Set in a French insane asylum for women, the play was notorious for its unsettling mixture of suspense, gruesomeness, and farce. The latest version of this Thrillpeddlers staple is directed by Russell Blackwood, whose other Hypnodrome excursions into the bizarre have included “Blood Bucket Ballyhoo,” “Hypnodrome Head Trips,” and Thrillpeddlers’ annual Halloween spectacular, “Shocktoberfest!!”

With “Flaming Sin,” veteran patrons of the Hypnodrome as well as newcomers can expect some lively additions to the Thrillpeddlers’ always-surprising and reliably sensational show. Following the program proper, each evening’s performance will be followed by a third-act after-glow floorshow, “The Blue Hour,” a bill of bawdy variety acts presented, Blackwood says, “as a complimentary aperitif to your evening of Grand Guignol terror and titillation.”

The Hypnodrome has also added two new “Turkish Corner” Shock Boxes, in which couples may bask in decadent languor while enjoying the show. Other Shock Boxes include “Heaven and Hell,” the “Pharaoh’s Tomb,” and the “Padded Cell.” The theater’s popular private “Shock Box” seats offer the same opportunity for illicit trysting that was once a feature of the Parisian Théâtre du Grand Guignol-with added special effects as a nod to the 1950s horror movie gimmicks of William Castle.

“We like to think of the Hypnodrome’s Shock Box seats as our haunted Madonna Inn,” says Blackwood. 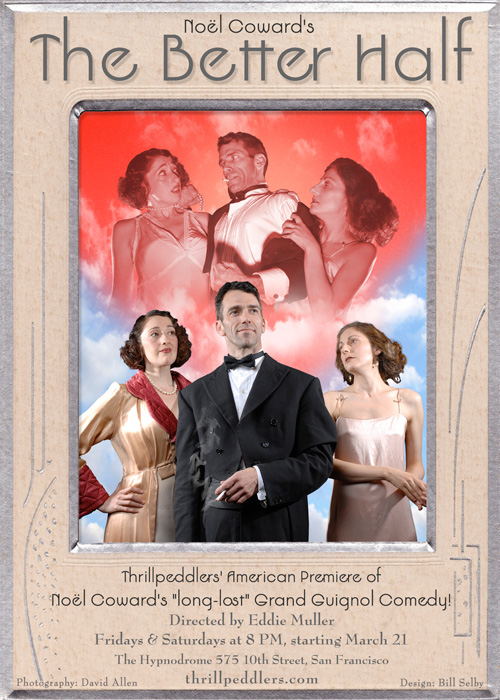