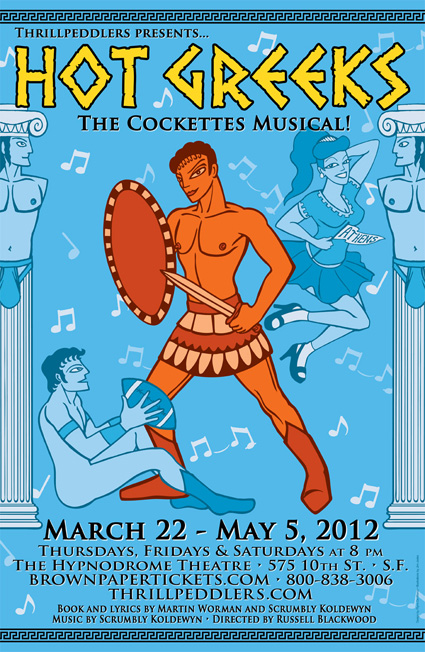 Thrillpeddlers are proud to announce our Spring Season 2012 production of HOT GREEKS, A New Full-Length, Fully Restored Version of The Cockettes’ 1972 Musical Extravaganza, an original musical by Martin Worman and Scrumbly Koldewyn. This is the 40th Anniversary of the original production. Originally produced as a Nocturnal Dream Show and performed in 1972 at midnight at the Palace Theatre in Chinatown in SF, HOT GREEKS was the fabled & fabulous Cockettes’ only other scripted book musical besides PEARLS OVER SHANGHAI. The Cockettes were a gender-bending theatrical troupe who not only originated these two shows, but also exerted a profound influence on the culture of our times, from the phenomenon of midnight movies to glitter rock stars and their outrageous fashions. In 2010 The Thrillpeddlers mounted a condensed 70-minute version of HOT GREEKS and it was an instant, sold-out hit. This new 2012 production expands the show to a full-length version and restores 3 songs from the original 1972 production.

In HOT GREEKS, college rhythm meets the Peloponnesian War as Athens University takes on Sparta State for their annual pigskin showdown. This musical, loosely based on Aristophanes’ LYSISTRATA, features the Tri Thigh Sorority girls and their hunky footballer sweethearts jiving to the big-band hit parade sounds of the 1940s. The kids sing and dance through the ruins of ancient Greece, on their way to consult the Oracle of Delphi in their pursuit of victory on the gridiron. Dancing columns, vestal virgins, country cousins, and even a pig, all join Lysistrata on her journey to save the day for the Gods and Greece.